Border Agents Shot Tear Gas Into Mexico. Was It Legal?Migrants running from tear gas fired by American border agents near the fence at Tijuana

A peaceful march at the border of Mexico and the United States on Sunday devolved into chaotic scenes of American border protection agents firing tear gas into a crowd that included children. Rights experts and others have questioned whether this use of force was justifiable or legal.

The episode, at the San Ysidro crossing that links San Diego and Tijuana, Mexico, became a focus of outrage, particularly after a photograph of a woman and her young daughters being tear-gassed attracted international attention. One of the children was barefoot and both were still in diapers.

President Trump and Kirstjen Nielsen, the secretary of Homeland Security, have defended the firing of tear gas. But others like Gavin Newsom, the governor-elect of California, have denounced the action. The Foreign Ministry of Mexico has asked the United States for a full investigation.

Is it legal to fire tear gas across an international border?

Dozens of tear gas canisters fired by the Americans were visible on the Mexican side of the border immediately after the episode. Legal experts have questioned the justification for using such weapons against people who were not in the United States.

Geoff Gilbert, a professor of international human rights and humanitarian law at the University of Essex in Britain, said that while all countries have the right to control who comes into their territory, “that doesn’t give authorities in the United States the right to fire tear gas into another country.”

He cited language in the United Nations Charter on the sovereign rights and obligations of member countries. Article 2, for example, says that members “shall refrain in their international relations from the threat or use of force against the territorial integrity” of other members.

If the migrants had been in United States territory and presented an immediate threat, Mr. Gilbert said, border protection agents might have been justified in using tear gas to disperse them under certain conditions.

Alastair Hay, a professor of environmental toxicology at Leeds University in Britain, said the tear gassing was “clearly a violation of another country’s territory” and an interference in Mexico’s affairs.

“To sort of unilaterally use tear gas in Mexico raises all sorts of issues,” he said.

What if the migrants had been in United States territory?

Rights activists said the firing of tear gas may have been an overreaction even if the migrants had trespassed the border. Because of the indiscriminate nature of tear gas dispersal, Ara Marcen Naval, an Amnesty International adviser on arms control and human rights, said that its use can cause additional harm, panic, injury and in some cases death.

“The use of tear gas in this context could violate international human rights standards,” she said. “I don’t see the necessity in this circumstance, as it was a completely disproportionate use of force.”

Jamil Dakwar, director of the American Civil Liberty Union’s human rights program, said force must be proportional to the seriousness of the threat.

“It is an indiscriminate weapon, and it is not regulated and it is not properly used,” Mr. Dakwar said, pointing out that women, children and asylum seekers were in the area when the tear gas was fired. “What we are calling for as a matter of principle is that de-escalation tactics should be used before resorting to tear gas and less-lethal weapons.”

It was not the first time tear gas had been fired across an international border. Hungary was widely criticized after a 2015 episode in which border authorities tear-gassed migrants and refugees in Serbia who wanted to enter.

When is it legal to use tear gas?

Tear gas is banned under international treaties on the use of chemical weapons in war, but it is legal for police and federal authorities to use tear gas domestically in riot-control situations, according to the Organization for the Prohibition of Chemical Weapons.

It has also been used by American border protection officials before. Tear gas has been fired near the southern border with Mexico at least 126 times since 2012, according to data shared by Customs and Border Protection, meaning these incidents go back well into the Obama administration.

Defending the response on Sunday, the Customs and Border Protection commissioner said that its officers had reacted to individuals “throwing dozens of projectiles” at them. Four officers received minor injuries.

Subscribe for original insights, commentary and discussions on the major news stories of the week, from columnists Max Fisher and Amanda Taub.

The agency’s manual includes guidelines for when officers are permitted to use so-called “less-lethal force,” such as tear gas. But the guidelines are open to some interpretation, suggesting that such force “may be used in situations where empty-hand techniques are not sufficient to control disorderly or violent subjects” and should be a “reasonable and necessary” response.

Did the tear-gas response violate the rights of asylum seekers?

Many of the migrants who gathered at the border intend to seek asylum in the United States. Some have fled persecution, death threats and violence in their home countries. That raises questions about whether the tear-gas response subverted the rights of asylum seekers, a group offered special protections under international law.

Under Article 14 of the Universal Declaration of Human Rights, which turns 70 years old next month, “everyone has the right to seek and to enjoy in other countries asylum from persecution.”

President Trump has tried to require that only those people who enter the United States at a regular border crossing can claim asylum. While a judge has since blocked that order, it makes clear Mr. Trump’s intention to halt the asylum application process of those entering from the southern border of the United States.

Such restrictions amount to a violation of international law, Amnesty International said in a report this week.

Babar Baloch, a spokesman for the United Nations refugee agency, emphasized the rights of asylum seekers on Tuesday.

“Any person whose life is at risk in their country of origin must be able to access territory and request asylum in a safe country,” he said, according to Reuters. “And each asylum request should be considered individually.”

Some argue that people seeking asylum can simply claim it in Mexico, or be sent back to Mexico by American authorities. But rights advocates say Mexico is not considered a “safe third country” for asylum seekers, a legal requirement for such moves.

According to another report this year from Amnesty International, Mexico violates international laws that prohibit sending people back to situations where they are at risk of persecution. The organization said thousands of people currently seeking refuge in the United States run the risk of being sent back to their countries by staying in Mexico.

Has deadly force been used at the border?

At least seven people have been killed by American border patrol officers since the beginning of 2018, according to the Southern Border Communities Coalition, an umbrella organization of local groups that track the deaths.

Guidelines from the Customs and Border Protection agency say officers may use deadly force only when they have “a reasonable belief that the subject of such force poses an imminent danger of serious physical injury or death to the officer/agent or to another person.”

Advocacy groups say there is inadequate oversight of the use of force, and insufficient independent investigation into the fatalities. Some say the anti-immigrant passion stoked by the Trump administration has raised the risk that deadly force will increase.

Many were concerned by a statement from Mr. Trump ahead of the midterm elections that seemed to suggest he had authorized officers to respond to migrants throwing rocks as if they were brandishing firearms.

“I told them: Consider it a rifle,” the president said.

“We certainly don’t want to see the border patrol using live fire, as the president has suggested,” Mr. Dakwar said.

This image of a woman and her young daughters fleeing the gas attracted international attention.Credit Kim Kyung-Hoon/Reuters 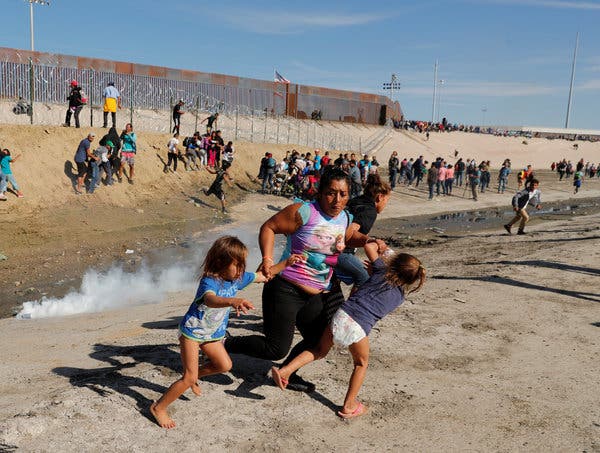 Image This image of a woman and her young daughters fleeing the gas attracted international attention.CreditKim Kyung-Hoon/Reuters

Are there ways to hold border authorities accountable?

While Mexico has asked for an investigation into the use of tear gas, a broader response from the country has been muted, perhaps reflecting an interest in maintaining cooperation with the United States on migration.

When the legality of the border episodes are in question, it can be difficult to hold people accountable within the United States, rights groups say, even though federal agencies like the Department of Homeland Security’s Office of Civil Rights and Civil Liberties review complaints.

Just last week, an American border protection agent who shot and killed a Mexican teenager from across the border in Arizona in 2012 was acquitted of manslaughter charges.

Megan Specia is a story editor on the International Desk, specializing in digital storytelling and breaking news. @meganspecia

Rick Gladstone is an editor and writer on the International Desk, based in New York. He has worked at The Times since 1997, starting as an editor in the Business section. @rickgladstone