Who is a target for deportation?

Washington (CNN)The Trump administration will no longer seek to automatically release pregnant immigrants from detention — a move in line with the overall efforts by the administration to hold far more immigrants in custody than its predecessors.

The change in policy could pave the way for more pregnant women to be held in detention facilities while they await lengthy court proceedings about whether they can stay in the US, facilities that are already decried by critics for tough conditions. The decision comes as immigration advocates have assailed the administration’s efforts to hold more immigrants in detention writ large and its increased arrest of noncriminal immigrants.
The change in policy was sent by Immigrations and Customs Enforcement to Congress on Thursday morning and later announced in a conference call with reporters. The policy was first finalized in December, officials said. 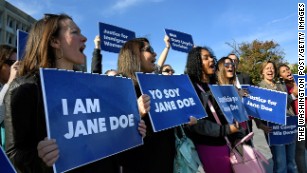 Undocumented immigrant teen obtains abortion after legal battle
According to Philip Miller, a top official in ICE’s Enforcement and Removal Operations, as of March 20, there were 35 pregnant women in detention in ICE’s custody. Since December, 506 pregnant women have been detained, Miller added.
He said it was difficult to estimate how many more pregnant immigrants would be detained under the new policy. Immigrants who are caught trying to cross the border illegally already are required to be in detention — although once they pass a threshold test for asylum claims, the government can choose to release them. He also could not say how the policy applied to nursing mothers.
According to the new directive, immigration officers will no longer default to trying to release pregnant women who fall into immigration custody, either because they are undocumented or otherwise subject to deportation. The Obama administration policy urged officers to presume a pregnant woman could be released except for extreme circumstances.
But an FAQ sent with the directive makes clear that ICE is not going to detain all pregnant immigrants. The policy will require a case-by-case evaluation, the FAQ explains, and will keep in custody “only those whose detention is necessary to effectuate removal, as well as those deemed a flight risk or danger to the community.”
ICE will also lean towards releasing pregnant women if they are in their third trimester, Miller said mainly because they would not be allowed to fly and thus couldn’t be deported in that trimester, and will also make an effort for detention facilities to provide services to pregnant women and parents.
Miller downplayed the impact of the change, saying it was an attempt to make clear the administration’s policy that no immigrants are exempt from enforcement.
“To mischaracterize this as some kind of wholesale change or draconian change is inaccurate. We’re aligning this policy, as all of our policies, with executive orders from the President.”
The move follows controversial efforts by the Department of Health and Human Services to keep unaccompanied minor immigrants in custody rather than releasing them to obtain abortions, a policy that has been the subject of intense litigation and criticism from the advocacy community.
Groups have been critical of the treatment of immigrants in detention. A coalition of civil rights, pro-immigrant and women’s groups have also raised concerns about medical services for pregnant immigrants and a number of miscarriages in custody. Members of Congress also questioned the Department of Homeland Security about those conditions.
Calling it an “attack on women and children,” Michelle Brané, director of the Migrant Rights and Justice Program at Women’s Refugee Commission, said the organization “condems” the move.
“The Women’s Refugee Commission has long documented the dangerous and unhealthy detention conditions that are especially dangerous and inappropriate for pregnant women,” Brané said in a statement. “Many women are pregnant as a result of rape and violence that they experienced either on the journey to the U.S. or that may be part of an asylum claim. Detention is especially traumatic for pregnant women and even more so for victims of rape and gender-based violence.”
ICE included Dr. Ada Rivera, the director of medical services for the agency, on the call to explain the services that will be provided for women in custody. She said all women of child-bearing age are tested for pregnancy at the beginning of their detention and ICE provides onsite care and education in addition to off-site access to specialized medical care.
The Trump administration has pushed ICE to expand the use of detention for immigrants subject to deportation, in an effort to cut down on the number allowed to live in the US as they await court proceedings.
The process for finalizing a deportation in the US immigration courts can take years, and often the immigrants released from detention begin to build lives in US communities, have families and in cases that they qualify for work permits, start jobs.