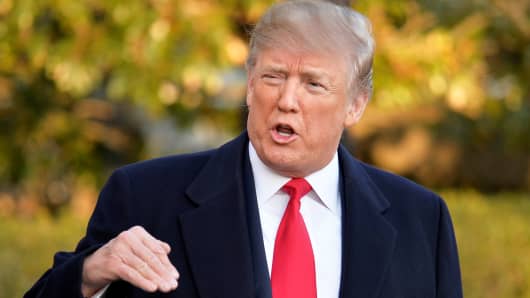 President Donald Trump may make an immigration deal, after all.

The White House has told Republican congressional leaders the president would consider an agreement to shield young immigrants in exchange for money for his proposed wall on the U.S. border with Mexico, The Washington Post reported Wednesday. A deal could come as part of a spending bill Congress needs to pass before midnight March 23.

Trump, who has proven tough to pin down on immigration policy, has recently insisted any deal to protect undocumented immigrants shielded by the Deferred Action for Childhood Arrivals program, or DACA, should include broader reforms to the immigration system. He wants to limit immigrants’ ability to sponsor family members and end the diversity visa “lottery” system.

Easing up on those demands would mark a shift for the president. It is unclear whether he would accept an immigration solution without the conditions he set earlier this year.

In a statement, White House spokesman Raj Shah said the White House opposes a so-called three for three deal, or three years of wall funding for a three-year extension of DACA.

“Securing the border is one of the most vital functions of government and is a core part of any routine funding bill,” Shah said in a statement. “Separately, we have never stopped working to negotiate an immigration reform package that addresses DACA, stops illegal immigration and secures and modernizes our legal immigration system.”

Trump ended DACA, which was set up by President Barack Obama, in September, with a six-month delay to encourage Congress to pass the legal protections into law. The program offers shields and offers temporary work permits for young immigrants brought to the U.S. illegally as children.

It was set to start phasing out on March 5, but the Supreme Court last month declined to hear an appeal of a lower court ruling saying the government must accept DACA renewals from the roughly 700,000 people already shielded.

Trump has promised to treat the young immigrants with “heart.” But he is balancing that desire with his campaign pledges to crack down on immigration and build the physical barrier on the southern border.

While Democrats expressed some willingness to approve border wall funding in exchange for DACA protections, they have refused to support changes to family sponsorship or the visa lottery system.

In February, the Senate blocked multiple immigration proposals that would have enshrined protections for the immigrants.